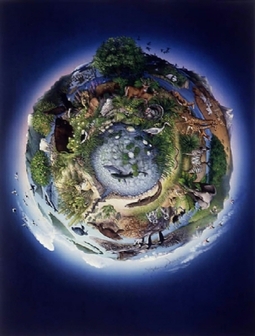 The biosphere is the part of Earth that supports life. It consists of all living things on the planet. Life is found in all of the components of the climate system on Earth.

Role of the Biosphere in Earth's Climate System

One of the main roles of the biosphere in Earth`s climate system is that the biosphere affects the albedo of Earth's surface. Also, living creatures have a large influence on the level on greenhouse gases found on Earth, keeping the levels of greenhouse gases at a reasonable level which in turn maintains climate (CO2 and methane are two examples of this). Another thing that the biosphere contributes is organisms that utilise photosynthesis. Organisms that use photosynthesis for gathering energy contribute by controlling the amount of carbon dioxide in the air, reducing its concentrations.
Another thing that the biosphere affects is the amount of solar radiation that hits Earth through the atmosphere. Millions of spores, bacteria, viruses, and many other microscopic organisms are moved around by the wind in the atmosphere, where they absorb and reflect solar radiation, which cools the planet.